The uncomfortable subject of toilets

Before the invention of the toilet with water flush in the 18th century, people relieved themselves virtually anywhere outside the house in an entirely uncomplicated and unselfconscious manner. It was only in the 20th century that toilets became a more common feature in private homes, as up to this point, they had been reserved for a very small elite. The more private the rooms containing toilets became, the more restrained people became when it came to using them. This has gone so far that nowadays some people are even embarrassed to place their toilet paper on the supermarket conveyor belt or carry it home under their arm.

We prefer to use our own toilet at home because we are worried about leaving behind unsightly traces or unpleasant odours if we need to use public facilities when we’re out and about. So we refuse to go at work and wait until we get home in the evening to visit the toilet with complete ease. This was revealed by a representative survey conducted by the Forsa research institute. 69 % of those surveyed said that they prefer to use their home toilet to empty their bowels.* Familiar surroundings play a decisive role here. According to Nick Haslam, an Australian professor of psychology, everything we feel and think has a direct effect on our body – and therefore also on our experiences of using the toilet. And because we feel safe and comfortable at home, our bowels are able to relax properly. As a result, we are able use the toilet.

Three cheers for the toilet

Have you ever taken a proper look at your toilet? Probably not, right? That’s too bad, because such a significant invention deserves much more attention. After all, we use toilets every single day and they directly influence our well-being. In addition to conventional WC models, modern toilets can also feature integrated spray functionality and odour extraction unit. Such features offer an entirely new dimension of cleanliness and well-being after a visit to the toilet.

* Results of the Forsa survey on toilet use in Germany commissioned by Geberit.

Solutions for a little extra comfort in the bathroom 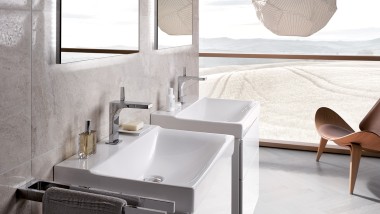 Which bathroom is the right one for you?

But, what exactly are your needs? Is space, cleanliness or the design important to you? Would you like user-friendly products or would you prefer that extra degree of comfort that the Geberit AquaClean shower toilet, for example, has to offer? Or would you prefer a universal design? No matter what your needs are, we simplify your daily routine with our clever bathroom solutions.