In Cubus130 in Frankfurt, design and function complement each other in exemplary fashion, precisely because there is little space available here. With its solutions in front of and behind the wall, Geberit contributes to a residential building that anticipates urban living trends.

Mini balconies, mini bathrooms, small kitchens: Especially in big cities, where space is scarce and single households are standard, new forms of living are more than in demand. This demand is met by the Cubus130 apartment building in Frankfurt's Niederrad district. Since March 2021, the former dormitory, originally built in 1971, has offered 137 micro-apartments.

Most of the flats measure around 18 square metres, some are between 27 and 30 square metres. 24 flats meet all accessibility requirements. They are all modern, functional and inexpensive. After all, the mandate given to Nassauische Heimstätte, a publicly owned housing company that bought and converted the building, was to create affordable housing for broad sections of the population.

Also for a short time only

The house with the striking red façade and the cubic mini-balconies also offers a solution for another trend - living only for a short time. So, if you're looking for a comfortable place to stay while you study for a semester at university in Frankfurt am Main, do an internship or finish a temporary project, you'll find an already furnished home at Cubus130.

Cubus130 offers much more than small spaces and temporary stays, however. In its architecture and in its utilisation concept, the residential building anticipates the trend of shifting certain residential functions into semi-public space. The modern “homo mobilis“ does not need his own car, nor does he need his own washing machine, is the motto.at Goldsteinstrasse 130. Vehicles from a car-sharing provider are parked in the underground garage. Other services, such as a cleaning or laundry service, can be booked at any time. 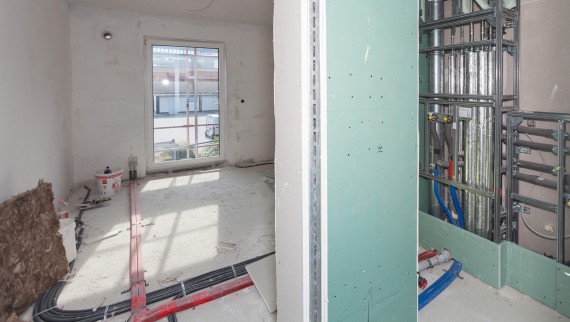 Cubus130 is also a lighthouse project for Geberit. “The original plan was to build all the flats in individual installations,“ says project manager Lothar Lühr, an engineer at LIST BiB Bielefeld, who was responsible for heating, ventilation and sanitary installations. Geberit proposed a more efficient solution with the GIS IV system, the industrially prefabricated pre-wall installations for the complete supply and drainage system. “That saved us three months of construction time,“ Lothar Lühr is pleased to say.

Geberit was equally convincing with its solutions for the design of the bathrooms, the smallest of which measure just 3.69 square metres. The project developers mastered this challenge thanks to the space-saving Geberit Renova Plan ceramic series. The washbasins from this series measure only 55 centimetres in width. At the same time, their clear, unadorned shapes strike a chord with the times.